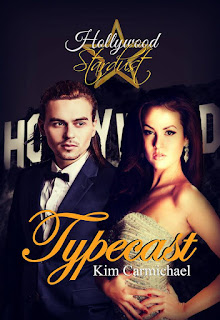 ~~~~~~~~~~~~~~~~~~~~~~~~~~~~~~~~~~~~~~~~~~~~~~~~~~~~~~~~
Another excellent novel by the always-amazing Kim Carmichael! This is the first novel in the Hollywood Stardust series & it follows the show's villain, Logan. Twenty years go by & Logan is needed for an interview.. He is still a bit full of himself & decides he only wants Ivy, a studio assistant, to interview him, as he doesn't like the lead interviewer. The chemistry between Ivy & Logan is near instant.. You can feel it in every word, in every look...Logan is undeniably attracted to Ivy & she feels the same but Logan has also been a very private person for many years & has trouble letting Ivy into his world.. There are flashbacks from the scripts to Hollywood Stardust to help understand why Logan is the way he is.. The scenes in this book are intense, detailed, intriguing & sexy as hell! Typecast is easily one of my favorite books from this year! Don't miss it!

Twenty years ago, the movie Hollywood Stardust defined a generation of teens and changed the four actors’ lives forever.

Typecast as the villain both in front and behind the silver screen, Logan Alexander has purposely allowed his star to fade. Now with the 20th Anniversary of the movie on the horizon, he is the only one fit to step into the spotlight, deal with the unwanted publicity, and make sure that things meant to be left on the cutting room floor remain there.

Ivy Vermont has always longed to be a leading lady, yet her paralyzing stage fright has relegated her to stay behind the scenes as a fact checker for Chargge.com’s entertainment webcasts. However, when her one-time poster-boy crush walks in to the studio demanding only she be in charge of his story, she knows she must take advantage of her big break.

Now, Logan tightropes between old loyalties and new love, while Ivy struggles to stay in reality with her ultimate fantasy.

Excerpt:
As if she could see the image in front of her, Ivy smiled.
He started to ask another one of his questions and vomit up another pre-rehearsed answer.
“So, b-b-back on topic, how often do you see your other cast mates?” Still keeping hold of his hand, she sat up. “Are you still friends?”
Well, well, she not only recovered, she got right back on the on-ramp to the questions everyone wanted to ask, shaky voice and all. He had to give it to her for starting with a lead-in
question, but the next one would undoubtedly be about Drew,
which sped right to everything else.
“Of course we keep in touch.” He offered the most benign answer possible.
“All of you?”
At least the woman stayed focused.
He tilted his head and ran his thumb across the back of her hand, wishing he could explore her smooth skin elsewhere. “I would rather talk about what we are going to do tonight to
celebrate the twentieth anniversary of one of your favorite films.” He smiled the same smile he produced the day the talent scout discovered him and called him a natural. Little did he know back then there was no such thing.
Her eyes widened and her hand trembled in his. “What’s the worst part of being the bad guy?”
Not expecting her to keep on track, he responded with the first thing to enter his mind. “Do you know that I never get the girl?” Right as the words left his lips, he wanted them back. Of
all the subjects, he needed to leave his love life, or lack thereof, out of the conversation.
“Do you ever wish you would have?”
“Oh, tough question.” Again, she surprised him by pressing forward instead of asking if he were attached at the moment, or ever, but he needed a second to reformulate his plan. “What if I
tell you after we look at a clip?”
They both stopped and stared into each other’s eyes. If they weren’t surrounded by a multitude of people and their relationship was more than an hour old, it would be the perfect time for a kiss. He bet her lips tasted sweet with a bit of tang, and was thankful no one put any of that horrendous gloss on them.
“You have ninety seconds and people are online commenting already,” the director announced. “Ivy, maybe you should introduce our guest?”
“Oh, man.” She shut her eyes for a moment, pressing her free hand to her chest.
Logan knew he played dirty, but even with her stage fright, she threw plenty of mud of her own. In fact, he just managed to avoid the splatter. “You’re fine.” All women loved the bad boy, even if art imitated life and he never got one long term. No matter, there was always another one, but not many quite like the sultry vine that made up Miss Details. “Take your time and remember to breathe.”
When he had arrived at the studio, he’d heard her defend him, and upon entering the room, it had pleased him to find her appearance matched her voice. Dark hair that glowed with
a tint of red under the lights framed her face and highlighted her huge gray eyes and perky lips. The second he had seen her, he’d almost expected a cartoon bird to appear and eat out of
her hand while she waved her magic wand of facts as her weapon and won.
“Thank you, Mr. Alexander.” She opened her eyes.
“Logan.” He leaned in even closer, wanting to remind her of the name she would be screaming out tonight in ecstasy.......